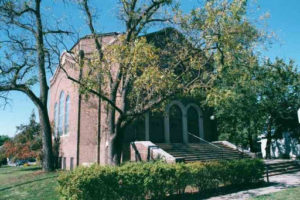 e town of Lincoln was founded in 1856. Twelve years later, in 1868,  the first Jewish settlers arrived: the Oppenheimers, who were soon followed by the Katzensteins, the Friends, and the Barrs, to name just a few.

It is a testament to the entrepreneurial spirit of these families that, before the end of the century, they had created Congregation B’nai Jeshurun, the children of Israel, and opened the doors of Lincoln’s first Temple on 12th and D Street. Unfortunately, in 1922, a fire damaged the building to such an extent that the congregation decided to move and start over, this time on the corner of 20th and South Streets. Within a year, ground was broken at this location, and in 1924 the new Temple was dedicated.

The design of the 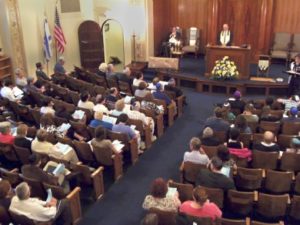 Temple by the Lincoln architecture firm of Davis and Wilson has Roman, Byzantine, and Moorish elements, reminiscent of Congregation Rodef Shalom in Philadelphia and many other Reform synagogues built in the same era. The dome of the South Street Temple was designed by Professor Meyer G. Gaba, a congregant, so that the sanctuary would be ‘acoustically perfect.’ These acoustics were designed to make it possible for the rabbi ‘to speak from the pulpit in a normal voice without amplification’ and be audible to the entire congregation (although today we use a microphone). 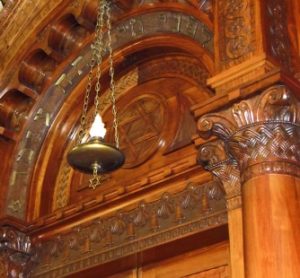 visual focal point of our sanctuary is unmistakably our walnut carved Aaron HaKodesh, the Holy Ark that holds the Torah scrolls, and the pulpit in front of it. Our ornamental woodwork was one of the first commissions of the woodworker Keats W. Lorenz, who later gained fame as the creator of the mahogany doors of the State Capitol’s East Legislative Chamber.

Although there have been technical updates, you will find our building almost completely in its original state, a physical testimony to an almost century old tradition of Jewish community, Jewish study, and Jewish worship at the corner of 20th and South.